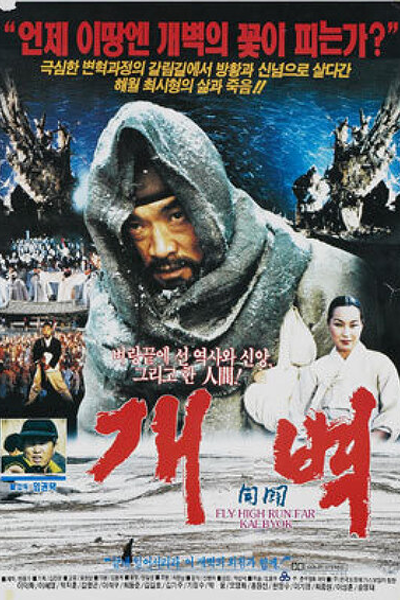 Other name: 개벽 開闢 開辟 Gaebyeog
Description
This film revolves around the life of Choi Shi Hyong, head of the religious sect, Chondogyo, in the later part of the Chosun Kingdom. He is constantly sought and harassed by the authorities. In 1864, Choi Jeh Woo, the reformist and founder of the Chondogyo sect is executed on charges of 'deluding the world and deceiving the people'. His successor, Choi Shi Hyong, begins to receive a ground swell of support from an increasing number of people. He then finds himself the subject of oppression by the court. He is separated from his family and goes to hide in a hermitage in the Taeback Mountains. With the belief that his wife is dead, Choi burns the tablet dedicated to her and flees to an even more remote region of the mountains.
Director: Im Kwon Taek [임권택]
Country: Korean
Status: Completed
Released: 1991
Genre: Drama, Historical,