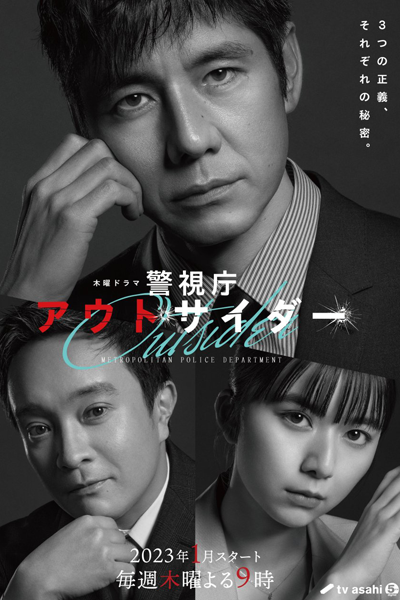 Kagawa Eiji is a detective who looks more like a gangster. He previously worked at the Metropolitan Police Department investigating organized crime groups, but he was recently demoted to the Sakuramachi Chuo Police Station without given a reason why. Kagawa Eiji desires to return to the Metropolitan Police Department to get answers. Meanwhile, he works with Detective Hasumi Kosuke at the Sakuramachi Chuo Police Station. Detective Hasumi Kosuke carries a big secret that has never been revealed.
A case comes up, where a housekeeper, working at a professor's house, is stabbed to death. At that time, a rookie detective, Mizuki Nao, begins to work with them. Kagawa Eiji and Hasumi Kosuke are bothered by her. She is the daughter of the assistant commissioner at the Metropolitan Police Department. They begin to work together.
Adapted from the novel "Keishicho Outsider" (警視庁アウトサイダー) by Kato Miaki (加藤実秋).
Original Network: TV Asahi,
Director: Kimura Hisashi [木村ひさし]
Country: Japanese
Status: Ongoing
Released: 2023
Genre: Detective, Drama, Investigation, Miniseries, Mystery, Novel,