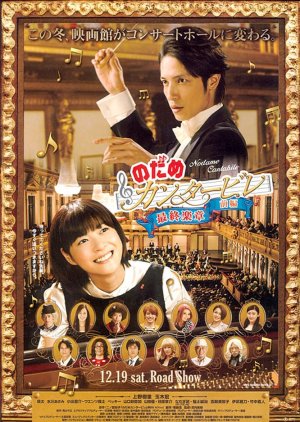 Other name: のだめカンタービレ 最終楽章 前編 , Nodame Cantabile The Movie I , Nodame Cantabile Final Music Part 1 , Nodame Kantabire Saishuu Gakushou - Zenpen , のだめカンタービレ最終楽章 前編
Description
Chiaki Shinichi wins he prestigious Platini International Music Competition and becomes the new orchestra conductor for the Le Marlet Orchestra. Chiaki then goes with Frank to observe the orchestra and is astonished by their poor performance. It seems due to lack of funding the orchestra lost many of its members & the interest of its audience. Meanwhile, Nodame prepares for a graduation exam at her music school. She is happy that Chiaki has finally become a conductor and becomes even more enthusiastic when Chiaki asks her to play Ravel's "Bolero" with the orchestra. But, her excitement soon turns to disappointment when Son Rui takes her part in the "Bolero" performance. Nodame tries to hide her disappointment from Chiaki. The performance itself turns out to be a bomb. The audience laughs while Chiaki tries to do his best. Chiaki thinks back to his first practice with the S Orchestra and his teacher Franz Strezemann. Nodame attempts to comfort Chiaki after the performance, with Nodame and Chiaki eventually deciding that they will make the next one a success. Chiaki holds an audition for new members in his orchestra, while Nodame takes care of the promotional activities. Finally, the performance is set to begin. The concert hall is packed thanks to Nodame's efforts. Nodame is excited about the performance, but also has an uneasy feeling as well. Chiaki then takes the stage, holds his conducting baton in the air and ...
Country: Japanese
Status: Completed
Released: 2009
Genre: Comedy, Music, Romance,