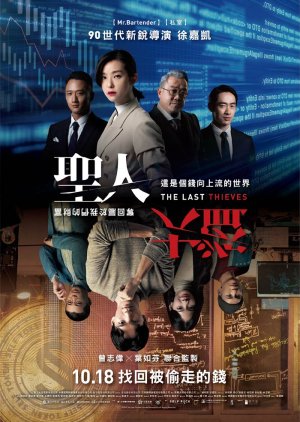 Other name: 聖人大盜 , Self Token , Sheng Ren Da Dao
Description
Have you ever thought why the harder you work, the poorer you become? The dream of young entrepreneur Yin Tzu Hsiang and his partners is to change the unreasonable structure of the current economy with a new generation of Internet – blockchain. The Sandbox Bill, an innovative economic experiment, gives Yin Tzu Hsiang a glimpse of hope of changing the world. He longs to join the Sandbox but has no idea that the reality is far more complicated than he could ever imagine. He is like a naïve lamb befriending a pack of sly wolves. Full of ideas and ambition, Yin Tzu Hsiang meets Hsu Ching, a practical and rational young woman. Hsu Ching makes Yin Tzu Hsiang realize that if he wants to change the world, he has to change himself first. Yin not only accepts Hsu Ching’s advice but lets her transform his appearance. Consequently, Yin becomes an idol and a saint blindly worshipped by the public in a time when people have given up independent thinking. Yin successfully joins the Sandbox project and begins raising money for the SELF TOKEN, a new generation of virtual currency that he has been dreaming to issue. Through it, Yin aims to rid of the old economic logic and to build a new decentralized financial model. While Yin is ecstatic about his dream coming true and enjoys the praises others shower him with, he is unaware that what lies underneath this sugar-coated success is the ugly reality, which will soon hit him hard. Beaten by reality and betrayed by his comrade, Yin keeps learning more and more cruel facts. Therefore he begins to wonder how big the gap between one’s dream and the reality is, and if he insists on realizing his dream, how much more sacrifices does he have to make? As for himself, is he the saint who makes the world a better place or just a thieving wolf in sheep’s clothing?
Country: Taiwanese
Status: Completed
Released: 2019
Genre: Drama, Mystery,